Everything about the Angels is underrated

The coolness of the Angels is underrated. They've had some of the biggest names in baseball over the past 4 decades pass through town.
Reggie Jackson, Rod Carew, Nolan Ryan, Fred Lynn, Don Baylor, Bert Blyleven, Lee Smith, Bobby Grich, Doug DeCinces, Mark Langston and Vladimir Guerrero all had All Star years in Anaheim.

They had Jim Abbott, a one handed pitcher for God sake!

The Angels are also as strange as they are cool. They've had 3 city names since the 1996 season (California Angels, Anaheim Angels and Los Angeles Angels of Anaheim) yet they have never moved from the Big A.

The Naked Gun had its climax at an Angels game, Tony Danza once played an Angels pitcher and its most recognizable tradition is the Rally Monkey.

For years their reputation of collapsing was also underrated.
They blew the 1982 Best of 5 ALCS to Milwaukee despite having a 2-0 lead.
They blew the 1986 Best of 7 ALCS to my Red Sox when manager Gene Mauch made one of the great panic moves of all time and yanked a dominant Mike Witt in the 9th, only to have Donnie Moore serve up Dave Henderson's homer.
And in 1995, they were in first by 11 games in August only to lose a one game playoff to Seattle.

And their owners have been underratedly colorful. 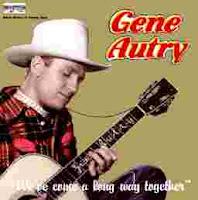 Between the singing cowboy Gene Autry and the flamboyant and free spending Arte Moreno... the Walt Disney Company was the LEAST interesting ownership group!

They also won a World Series (one my dad, a huge Giants fan would rather forget) with an underrated farm system.

In an age where people claim the World Series must be bought, the Angels won it all in 2002 with an entirely homegrown outfield, 2 home grown catcher and a home grown slugging World Series MVP thirdbasemen. 3 out of their 4 starting pitchers, their All Star closer, their phenom set up man, their lefty specialist and two middle relievers were also products of their farm system. Plus, while their middle infielders were drafted by other organizations, they spent their rookie years in Anaheim.

They had 16 players who came up through their system and 3 more picked up as minor leaguers on a team that won the World Series. The Red Sox and Yankees WISH their farm could produce like that.

I'll tell you something else about the Angels that is underrated: Their impact on baseball this decade.

Tonight's 18-9 pounding of the Yankees on the heels of splitting 4 in Fenway should serve notice that the ALCS won't necessarily be latest chapter of Red Sox vs. Yankees.

A lot of people, including yours truly picked the Angels to win it all. And the fact that they can pitch, they can close and they can manufacture runs and neither the Red Sox nor the Yankees really scare them... it doesn't feel like such a bad pick.

And if they win it all, that would mean the underrated Mike Scioscia would have lead the Angels to 4 playoff appearances in 6 years including 3 trips to the ALCS and 2 titles.

Folks, in this day and age where no team can repeat... that could make the Angels the team of the decade!

And it would have all been happening without us even noticing.
Who would have thought a potential dynasty would be underrated?

Now if only they could decide the name of their team!
Posted by Sully at 10:54 PM