WHO SHOULD I ROOT FOR? Part 3: THE AL WEST

I picked the Los Angeles California Angels of Anaheim in Orange County to win the World Series... and the way they beat both the Red Sox and Yankees recently makes it look like a solid pick.

However the Wild Card leading Seattle Mariners somehow someway has tied the Angels in the loss column!

With a big 3 game series next week between the two teams looming next week, it's time for me to figure out what team to root for.

First Criteria: Which city's fans have suffered more? Seattle, a city of half a million, has not had a champion since the 1979 Supersonics.

Anaheim, a suburb of Los Angeles, has been home to a World Series champion and a Stanley Cup champion this decade...

While the fans have to suffer having a hockey team named after an Emilio Estevez movie, it's not so bad because nobody there follows hockey.


Second Criteria: Which team had more superstars play in their prime there?

Nolan Ryan had his best years there, including 4 no hitters.

Rod Carew also had some great years in Anaheim (but none that would match his 1977 MVP season with the Twins).

Has there been a trio of recent superstar teammates in their prime better than A-Rod, Junior and Big Unit?

Third Criteria: Which team has the cooler manager

Mike Scioscia is quietly putting together a resume with some more years, a few more division titles and another Championship might be Hall of Fame worthy.

I would know who Seattle's John McLaren was if he came up to me and said "Hi, I'm John McLaren."

He replaced Mike Hargrove who suddenly quit in the middle of a winning streak. It's too bad he's no longer there. He was hosed when Cleveland fired him

The Mariners had 6'10" freak of nature Randy Johnson who can destroy a bird with his fastball. One of the great pitchers of all time.

The Angels had Jim Abbott. He had one hand!
And went straight from college to the majors... and won 18 games for the Angels... later he threw a no hitter with the Yankees.

I know he was only an All Star for a few years... but remind yourself... HE HAD ONE HAND!

Fifth Criteria: Which team has given this Yankee hater more pleasure in October? 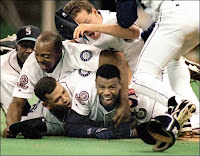 The 1995 Division Series was one of the best post season series ever. And it ended on the 11th inning when Edgar Martinez drove in the tying and winning runs. While I know some Yankee fans still lament that series (Mainly for Don Mattingly, whose Ringless career ended with Griffey sliding across home plate), the loss lead to the hiring of Joe Torre. Oh yeah the Yankees came back to beat the Mariners in the 2000 and 2001 ALCS.

Meanwhile the Angels beat the Yankees in the 2002 and 2005 playoffs... two of the most shocking defeats of the Joe Torre era. Also the Angels are the only team to have a winning record against the Torre Yankees. Bliss for the Yankee hater.

Sixth Criteria: Which team had a more embarassing cap? 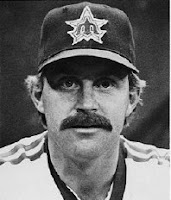 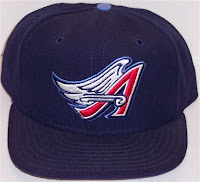 The Mariner trident was cool, but the star around it was silly.
The Angels cap from the late 1990s early 2000s with the wings is one of the all time worst.


Seventh Criteria: Which team was better represented in The Naked Gun?

The climax of The Naked Gun took place when Queen Elizabeth joined Riccardo Montalban at an Angels/Mariners game. Read that sentence again to appreciate the genius of the first Naked Gun movie.

Reggie Jackson made an appearance as the mind controlled assassin (again... genius) while the only real ballplayer on the Mariners was Jay Johnstone, who never even played for the Mariners.

Strangely, they shot the scenes at Dodger Stadium instead of Anaheim. Why not drive to Anaheim or make it a Dodger game?

Seven criteria and still no winner.

The Angels new name is stupid!
Until you figure out where you are from, call yourself the California Angels.

THE WINNER: THE MARINERS!!!

So I'll be rooting for the Mariner Moose over the Rally Monkey!
Disneyland over Grunge Rock!

But truth be told, the Yankee hater in me wants them both in the playoffs!

The Red Sox aren't playing either of them for the rest of the season...
GO MARINERS IN HEAD TO HEAD GAMES... GO ANGELS AND MARINERS FOR THE PLAYOFFS!
Posted by Sully at 8:38 AM