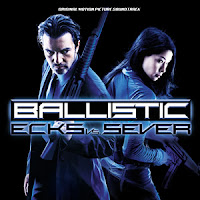 Keeping my inexplicable theme of talking about films from the early 2000's today, I move from the brilliant In the Bedroom to the rancid Ballistic: Ecks vs. Sever.

Its title, besides being possibly the worst in movie history (rivaled only by V. I. Warshawski, Hideous Kinky and Cops and Robbersons) comes very close to referencing two Hall of Fame pitchers.

Those pitchers are of course Dennis Eckersley, aka Eck and Tom Seaver.

And because I am a strange man whose mind wanders to strange places sometimes, I wondered if Eck ever went up against Seaver.

It was a question that I did not know the answer to, especially when you consider that Seaver spent almost his entire career in the National League before interleague play while Eck's early career was all in the American League.

Well, as the brilliant Emmy winning comedy writer Dan Cronin once noted "because of the internet, there are no more idle thoughts."

So I looked up their respective career numbers and the window of a meeting was closer than even I thought. Eck's first 9 seasons in baseball were all in the AL, and Seaver was in the NL during that time. In Eck's 10th season he was traded in May from Boston to the Chicago Cubs... but Seaver was now in the American League pitching for the White Sox.

So there was less than a two month window for them to have played each other.
(They both pitching in the 1977 All Star Game in Yankee Stadium, but that was an exhibition and hardly ballistic.)

Thanks to baseball-reference.com, the reason why the internet was created, I have found that there was indeed one meeting... ECK VS. SEAVER! Only 17,550 were in attendance as the White Sox were doing a feeble defense of their Division Championship and the Red Sox had fallen hopelessly behind the eventual World Champion Tigers.

The game remained scoreless until the top of the third when Carlton Fisk, another future Hall of Famer, haunted the Red Sox with an RBI single scoring Jerry Dybzinski, the greatest player named Dybzinski in baseball history.

Then Eck and Seaver bore down and let's just say it was Ballistic!
That was until manager Ralph Houk lifted Eck for Mark Clear. My dad used to call him Mark "Ball One" Clear because inevitably his first pitch would be ball one.

Well, he let up a double to Dybzinski, walked Rudy Law, allowed an RBI hit to Fisk and a sac fly to Harold Baines. Nice work Clear!

Seaver would cruise until the 9th when Reid Nichols hit a pinch hit double and Seaver was lifted for Al Jones, who recorded the save.

Future Hall of Famer Wade Boggs also played, going 1-3 with 2 walks.
Jim Rice, who should be in the Hall of Fame, was hitless in 5 at bats.
And future Red Sox broadcaster Jerry Remy went 2-5 with 2 stolen bases.


Seaver defeated Eck...
Like Ecks vs. Sever, there was no rematch.