There are other series going on besides Red Sox Yankees! 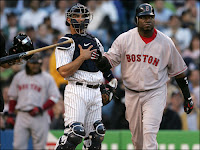 So the Red Sox and Yankees are playing each other... and as I said before, our rivalry is better than your rivalry .

BUT, it is a series between two teams with 8 games between them and less than 5 weeks to play.
And there are teams playing in much tighter races.

The first place Angels are continuing their series against the second place (and Wild Card leading) Mariners with only 3 games between them.

The first place Mets lead the Phillies by 5 and they play the second game of their series tonight.

The first place Cubs and second place Brewers have only 1 1/2 between them as they play in Wrigley.

The second place Padres are trying to chip away at the Diamondback's one game in the loss column lead when they play each other in San Diego.

But all the attention is on Red Sox/Yankees.
And who am I kidding?
That's the only game I'm interested in.
Posted by Sully at 3:24 PM