Hope they have cannolis in Heaven 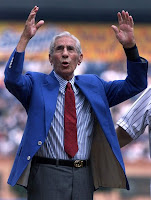 Phil Rizzuto's death today made me sadder than most celebrity deaths. I was a passionate fan of the Scooter. I loved listening to him in the summer time when we would be staying with family in the New York area. I would watch the 11 Alive broadcasts in Boston when we got cable. And when I went to NYU, I watched every single broadcast that I could.

Nobody was funnier than Scooter. Nobody could go on the tangents like Scooter... talking about canolis, a movie he saw on TV the other night, his fear of lightning... and would admit he put "ww" on his score card for plays he wasn't watching.

And I was watching him in the early 1990s, when the Yankees were bad (hello Hensley "Bam Bam" Meulens!) and there was little reason to be watching the games... other than Scooter's comedy.

Listen to Scooter's radio call of the last game of the 1976 ALCS.

While introducing the Royals lineup he noticed Telly Savalas was sitting near the Yankee dugout. He went on a tangent about his bald head and how women found it sexy.

Here he is about to call a do or die playoff game and he's talking about Kojak's head!

And underrated in his hilarity was the contributions of Bill White and Tom Seaver, who acted as enablers and never brought him back to the game at hand.

For me, the greatest thrill about listening and laughing during a Scooter broadcast was bringing me close with my mom.

My mom grew up a Yankees fan and listening to Scooter. And I always felt during the summer time we could listen to the Yankee games, even though I am a Red Sox fan, and have a shared experience from her childhood.

We would laugh and quote him days and weeks after saying something funny with White or Tom Seaver. And when I was living in New York while my mom was in California, I would call her up with the newest funny Scooter quotes.

Baseball is often referred to as a father and son tradition. But with Scooter, the real joy came from a mother and son bonding... and of course how damn funny he was!