Can we play the White Sox again, please?

It was so much more fun beating them like a pinata.

Well, as I said earlier in the year, one of the advantages of jumping out to a big lead is you can withstand a smack to the face.

Just imagine if the Tigers and Yankees split last weekend and the Red Sox only won 3 out of 4... it would be a 3 game lead. The Red Sox lead hasn't been that small since April 26. The Yankees haven't been only 3 games out since they lost in Fenway on April 21.

But they aren't. It's a 5 game lead going into Labor Day weekend. The sweep stunk... but in 1999 with the Yankees ahead of the Red Sox in the standings, the Red Sox came into Yankee Stadium and swept them, including a wild game on September 11th where the Sox won 11-10 and cut the lead to a mere 3 1/2 games.

Do you remember that?
OF COURSE YOU DON'T! The Yankees dusted themselves off, cruised to a division title and won the World Series... beating the Red Sox in 5 games in the ALCS and sweeping the Braves in a World Series I bet you don't remember. 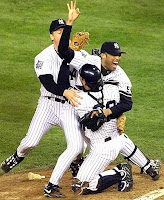