And so it continues for Don Mattingly 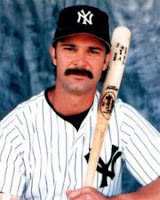 What is it about Don Mattingly?

Seriously will this guy ever ever EVER participate in a World Series?

The Yankees made the World Series 4 times between 1976 and 1981.
Don Mattingly came up to the bigs in 1982 and they went on the biggest World Series drought since before Babe Ruth arrived.

They had the best team in the AL when the 1994 strike killed the post season.
In 1995, the Yankees lost a gut wrenching Division Series with the Mariners.

Mattingly returned to the team in 2004 as a coach and was on the bench for the greatest face plant in post season history.
I don't recall against whom.

Seriously I wonder what Mattingly must think about guys like David Eckstein, Craig Counsell and Mike Timlin who won World Series on multiple teams... or guys like Clay Bellinger who gets multiple rings riding the bench.

But man... even this Red Sox fan is starting to feel bad for Mattingly!
Posted by Sully at 9:38 PM