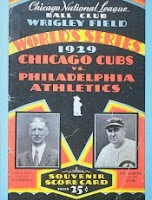 The Red Sox comeback was the second biggest comeback in playoff history, second only to the 1929 Philadelphia Athletics comeback in game 4 of the World Series.

The aftermath of last night’s game was, among other things, a chance to tip your cap to the 1929 A’s… who like the Red Sox did two things:

They came back from a huge deficit in a post season game.

They won a huge comeback the same year the stock market collapsed.

1929 was a long time ago… it was so long ago it was a period of time when the Cubs actually won National League Pennants and it didn’t seem shocking.

But it’s worth going over that amazing game…
The A’s were playing the Cubs and there were Hall of Famers a plenty on both sides.

The Cubs were managed by Joe McCarthy and their lineup featured Hack Wilson and Rogers Hornsby.

Connie Mack’s A’s countered with Hall of Famers Mickey Cochrane, Jimmy Foxx and Al Simmons in the heart o their lineup and Lefty Grove was the Ace of the staff

Cubs pitcher Charley Root (who would later become famous for being the pitcher that Babe Ruth supposedly called his shot against in the 1932 World Series) was cruising.

And then it happened…
Al Simmons homered to make it 8-1.
No big deal.

At this point I think even Grady Little would have warmed someone up.

Pinch hitter George Burns came up.
No not THAT George Burns... but for the record, the George Burns you are thinking of was 33 years old during the 1929 World Series.

The George Burns who played was 36 years old and winding down his career that included an MVP with the 1926 Indians.

They might as well have sent up the comic because Burns popped up... but Max "Camera Eye" Bishop singled home another run to make it 8-4.

McCarthy brought in Art Nehf to pitch to Mule Haas.
(Camera Eye? Mule? Man, baseball needs to get back to nicknames!)

Haas hit a flyball that Cubs centerfielder Hack Wilson lost in the sun.
Now I know this is strange to read for some of my younger readers... but yes, he lost it in the SUN!
They were playing the game in the day, not at a 8:30 PM start on the East Coast.

Well the ball dropped in and Boley, Camera Eye and Mule all came home in what was mercifully called an inside the part homer.

Nehf walked future Hall of Famer Mickey Cochrane and was pulled for Sherrif Blake.
(SHERRIF BLAKE! How awesome are these names?)

Simmons got his second hit of the innings as did Foxx who drove in the tying run (nice job Sherrif.)

Pat Malone, without a cool nickname hit Bing Miller to load the bases and Dykes doubled home Simmons and Foxx to give the A's the lead. Malone struck out the next two batters, but by then the 8-0 lead had become a 10-8 deficit.

Mack brought in Hall of Famer Lefty Grove who got the Cubs in order in the 8th and 9th.

The A's took a 3-1 lead and then won the World Series the next day when they scored 3 runs in the bottom of the 9th against Pat Malone.

But there you have it... an amazing come back, albeit helped by the sun.

Evidently both NBC and CBS broadcasted the game with Graham McNamee and Ted Husing calling the game.
Please tell me someone out there has a recording of it.