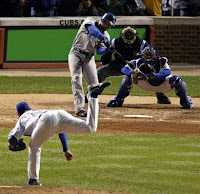 I want to humbly apologize to Cubs fans every where, especially my boss... the prolific and award winning TV producer Frank Sinton.

I was walking back from an edit bay to my computer when I walked past Frank's office.
To paint the picture a little bit, Frank is a HUGE Cubs fan.

He has an Ernie Banks uniform hanging in his office.

I poked my head into his office on the pretense of saying hello and updating him on the show we are working on. But in reality I wanted to catch part of the game that was playing in his office.

The Cubs were rolling. Wrigley was rocking. Ryan Dempster was dealing.
And Frank had an expression on his face that can only be described as "cautiously pumped."

Suddenly Dempster lost his control... he started nibbling to Ramirez (understandable) and walked him.
Then he nibbled when pitching to Ethier... and Dempster had loaded the bases.

I turned to Frank and said "This all started when I walked in. Maybe I should go."

Frank said "no it's alright."

James Loney was next up. Frank turned to Mark Mayer, the other executive producer (and a very happy Phillies fan), and said "I can't believe the Daily News gave the first base edge to Loney over Lee."

Dempster got 2 quick strikes on Loney.
And then it happened.

And Frank stood up pumping his fist with a loud "YES!"

One problem: Loney foul tipped it into the dirt.
New life.

And he hit a pop up to centerfield... that just kept going...
I thought it was going to the edge of the warning track... but it kept going.

And into the seats for a go ahead grand slam.

It was the "oh no" I said when Aaron Boone hit that home run.

I looked over at Mark and we shared an expression that clearly meant "I guess maybe the Daily News was right to give the Dodgers the edge at first."

So if I had ANYTHING to do with that loss, let me apologize to Cubs fans everywhere...

Especially the one who is employing me!