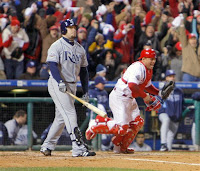 My wife Lisa and I watched the end of tonight's game at Mike and Anne's, the restaurant down the street.

I saw the baseball season end the way it was meant to be enjoyed... eating mussels at a bar and sipping a cranberry juice next to my wife as I listened to smooth jazz.

The Phillies got to within two strikes of the World Series title when Tampa pinch hitter (and old friend from the 2007 World Champion Red Sox) Eric Hinske had strike two called on him when he tried to check his swing.

The next pitch he feebly swung at and the Phillies were World Champs.

And my wife suddenly became a commentator.

"He was still mad about the previous pitch." She said.
"What do you mean?"
"He didn't have that fire... that sense of don't you try to throw a pitch past me you son of a bitch or I'll hit the sh*t out of it. He didn't have that killer look the way Big Papi did where you knew he was going to win. He was unnerved."
"Maybe it was a good pitch."
"No, he wasn't ready. He wasn't ready and now he's a shmuck. I feel bad for the shmuck, but he wasn't ready to hit."

I just looked at my wife... suddenly possessed by a bitter Tampa Bay fan.

She proceeded to breakdown the psychology of Eric Hinske and declared him unready to play.

It's the offseason and it's my wife whose providing the commentary that Tim McCarver and Joe Buck just couldn't pull off.

That's why I married her!