Strange... I'm not that nervous 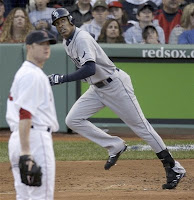 Yesterday was supposed to be the center square on the Bingo Card.

Lester pitching at home... that was the "given" game.
That was the game that made us all not really sweat out the 11 inning game 2 loss.

And yet here I sit typing this blog entry... and I am not a bundle of nerves.
I am not panicking.
I'm not really even that worried.

Those are games where nothing went right. There's no one play that nags at you after a 9-1 loss. No stifled rally, no bad call. It was a decisive ass thumpin'. And hopefully the Sox can just shrug and say "We'll get them tomorrow." 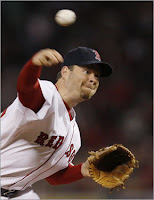 By taking the bullet and going the remaining 3 1/3 innings, Paul Byrd allows the Sox to set up the bullpen perfectly for games 4 and 5.

Papelbon, Masterson, Okajima and Delcarmen haven't pitched since the Saturday marathon... so Paps could go two innings. And the others can each go at least one. With Wakefield on the mound, it's good to know they can get as many as 5 innings from their top relievers.

3. We've Heard This Song Before!

It's almost exactly a year ago today that I told Red Sox Nation to calm the f--- down.

Yeah being down 2-1 to Tampa sucks.
How is that worse than being down 3-1 last year, IN Cleveland, facing Sabathia and Carmona for games 5 and 6?

How is that worse than being down 3-1 in 1986, IN Anaheim with Mike Witt dealing?

How is that worse than being down 2-0 in the 1999 Division Series, no Pedro, no Nomar, no life on the team and Cleveland's bats going nuts? 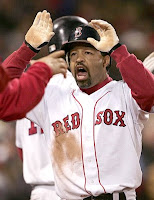 How is that worse than being down 2-0 in the 2003 Division Series facing Oakland's pitching?

Seriously... how is this worse than being down 3-0... 3 outs from a sweep... the Yankees in Pedro's head... Schilling on the operating table... Rivera on the mound... bottom of the order coming up?

How soon we all forgot Dave Roberts! 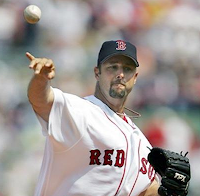 Call me insanely optimistic, but I think that with Tampa's offense clicking, now's as good a time as any to wheel out Tim Wakefield.

Seriously, they've been smacking the ball around left and right and their timing is just on...

Maybe some of Wake's knucklers floating into the zone is just what the doctor ordered. Maybe they'll be flailing at it. Maybe they'll be overly agressive. Either way, it will force them to change their approach to hitting which, safe to say has been working! 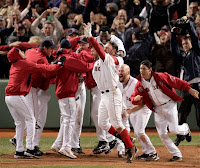 Don't get me wrong. I want the Red Sox to win the 2008 World Series as much as anyone you will ever meet.

And don't think for a second that I won't be incredibly disappointed if the season ends with the Red Sox watching another team celebrate.

But I won't be devastated.
Devastation ended in 2004. The feeling of "Oh Crap... I can't believe I was so stupid to think they'd actually win" is long gone.

And this isn't even the intense disappointment of 2005 either.
That year the Red Sox and Yankees finished the season tied... but because the Yankees won the season series 10-9, they were the Division Champs and the Red Sox were the Wild Card.

One more single win in 2005 would have meant the Sox would host the Angels (who they always beat) in the Division Series instead of starting the post season on the road against the much better (and eventual champion) Chicago White Sox.

The Red Sox were clobbered in game 1 in Chicago and lost two close games to end the defense of the World Series by being swept.

The end of the year left a disappointing emptiness. Not to mention the fact that the team was old and clearly breaking up. (Mueller, Damon, Millar and Arroyo will all be gone by the next opening day... Nixon, Foulke and Kapler would be gone the next off season.)

This year the Red Sox already pulled off the upset of the 100 win Angels with 4 unforgettable games including a 2 run 9th inning game winning homer from J. D. Drew and the series ending single by Jed Lowrie.

Between those games and the Dice-K game 1 win in the ALCS, the Sox have provided infinitely more October memories than the last time they defending a World Series title.

Plus with Lowrie, Papelbon, Youkilis, Ellsbury, Lester, Masterson and Bay all still young and not going anywhere... there isn't a sense of this being the only shot.


So let it be known I am rooting full steam ahead for the Red Sox to repeat as World Champions... but I'm not at all panicked.

Emotionally we are playing with house money.

That being said, I hope they kick Tampa's ass tonight.