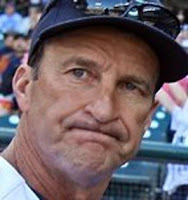 What must Manny Acta be thinking right now?

He's dumped because he couldn't make a lousy team rise above the level of "lousy."

So in comes Jim Riggleman.

Riggs has managed all or part of 10 seasons now.

He has one playoff spot (the 1998 Cubs who won the one game playoff against the Giants for the Wild Card only to be swept by Atlanta.) He has one other winning season (the lock out shortened 1995 season with the Cubs.)

He has 4 complete seasons where his team had a winning percentage of .420 or lower.

And now has lost his first 6 games as the Nats new manager.

Acta must be thinking "I could have done THAT!"

With such a lousy resume, why the hell does he keep getting managing gigs, even if they are temporary (like his 90 game tenure with the Mariners last year)?

You are really saying that Chris Chambliss can't handle this?

I will keep lobbying for Chambliss until he gets a gig!