I hate to say it... but Manny did it right 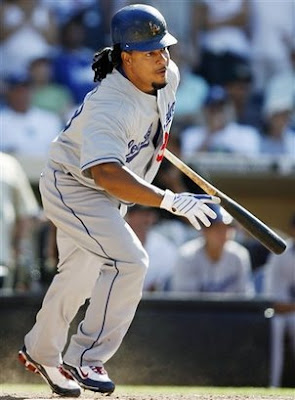 I hate to say it... mainly because I've been a Manny apologist for a while now... so I am expected to catch some flack for this.

But Manny has been the strange model of how to deal with being caught with steroids.

Seriously, think of it. He was caught... he never denied it. He never fought it.

Oh yeah, his handlers and Scott Boras tried to make us believe that Manny was taking fertility pills. But did you notice Manny himself shrugged and took the suspension.

Now look, I am not trying to equate Manny with St. Thomas More... but serving the suspension and not denying it will go a long way of making people forget it.

There was no vague apology a la Giambi.
There was no denial of Bonds.
There was no odd legal phrasing like McGwire.
There was no finger waggling of Palmeiro.
He didn't suddenly forget how to speak English like Sammy Sosa.
There was no grandstanding (and throwing his wife under the bus) like Clemens.

Now of course being caught as a 'roids user is no longer shocking. And he didn't break any Holy baseball records.

But I'm telling you, Manny living on his own planet in the end will be as big as an asset as steroid fatigue.

When he comes back to Los Angeles he will be treated like Lindbergh returning from Paris.

(Remember, these are the same fans who vilified Bonds all of those years.)

So you superstars who test positive in the future, be like Manny and just take the punishment and hurry back.