How much further can the Red Sox sink? 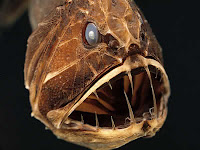 The Fangtooth fish, pictured to the left, are one of the deepest living fish in the ocean. They can live 16,400 feet below the surface.
And at this point I believe a fangtooth is living exactly where the Red Sox seem to be heading... to the bottom.
Oh it is not time to panic yet (the Sox are still a playoff team as of this writing) but they are wasting good pitching performances left and right and your pal Sully is looking up deep sea creatures. That can't be good.
It's been 49 innings since the Red Sox scored multiple runs in an inning and for the first time all year, they've been swept.
And if these fish could follow the Red Sox, they'd be grinding their fangteeth!