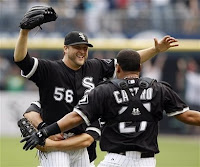 1. I think Ramon Castro might be a good catcher for Mark Buehrle.
Castro had never caught Buehrle before. Usually you hear that a pitcher needs to get used to throwing to a new catcher.
Well, you can't call a better game than Castro did.
2. I guess that other No Hitter doesn't look as cool now!
On April 18, 2007, Buehrle threw a no hitter against the Rangers... and at the time it was the game of his life. He threw a no hitter where he faced the minimum number of batters...
But he walked Sammy Sosa (remember him?) in the 5th inning and then picked him off.
No need to pick anyone off today.
3. He joins the company of pitchers with more than one no hitter
And here's hoping I get a lot of hits from people who Google "Who has thrown more than one hitter other than Mark Buehrle?"
The answer...
Nolan Ryan has 7 no hitters.
Sandy Koufax has 4.
Larry Corcoran, Bob Feller and Cy Young have 3.
Jim Bunning, Steve Busby, Carl Erskine, Bob Forsch, Pud Galvin, Ken Holtzman, Randy Johnson, Addie Joss, Dutch Leonard, Jim Maloney, Christy Mathewseon, Hideo Nomo, Allie Reynolds, Warren Spahn, Bill Stoneman, Virgil Trucks, Johnny Vander Meer and Don Wilson all have 2.
And now you can add Mark Buehrle to the list.
4. Don't Look Now, But The White Sox Are In First Place
As usual, they won't get any love... but the Tigers are not exactly a juggernaut and the White Sox (lest we forget) are the defending Division Champs... and this is the kind of thing that can spark a team.
And who are the White Sox playing starting tomorrow? The Tigers!
Man this year is going to be fun!

5. This is his biggest moment as a White Sox pitcher... and that's saying something!
He's had an underratedly awesome 10 seasons in Chicago. He was part of the World Champion squad in 2005 as well as the Division winners in 2000 and 2008.
He's a workhorse who has led the league in innings twice, threw a complete game win in Game 2 of the 2005 ALCS.  He threw 7 solid innings in Game 2 of the 2005 World Series and 2 days later came out of the bullpen to save Game 3.
He's made 4 All Star Teams and was the starting pitcher in the 2005 All Star game, finished 5th in the Cy Young vote that year.
And this year Obama sought him out in the All Star Game locker room.
Oh yeah, he already threw a no hitter.
But today was the biggest night for him.

6. Would it have killed the Buehrle family to have changed their name to "Burly" when they came through Ellis Island?
I've had to double check his name every time I typed it on this posting. Is it U-E or E-U? And where do I stick this random H again?
Posted by Sully at 5:38 PM