Not So Dirty Sanchez 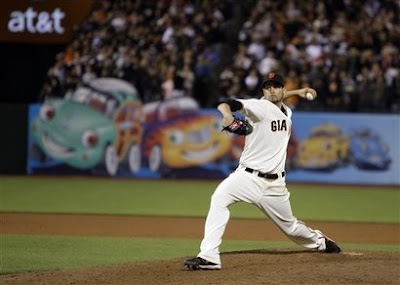 The second Sanchez struck out Everth Cabrera to seal his no hitter last night, I called my buddy Greg Lee, the second biggest Giants fan I know (after my dad.)

I assumed he was somehow following the game. He wasn't.

I said "How about Jonathan Sanchez?"

I said "He threw a no hitter."

There was a pause.

That pause said it all and illustrates the repercussions of Jonathan Sanchez's no hitter.

As I wrote last night, Sanchez was the least likely Giants starter to do this.

But imagine this scenario Giants fans... what if this gives Sanchez confidence?

Derek Lowe threw a no no in 2002 and wiped away a horrific 2001 to have a Cy Young worthy season. And NOBODY's confidence was lower than Lowe's!

People have never doubted Sanchez's stuff, it was always his head that seemed screwed up.

What if his head is now screwed on tight?

Can you imagine a pitcher with his stuff and thinking right in the #4 spot in a rotation?

Lincecum is probably winning the Cy Young again.
Cain is a legit All Star.
Zito has been up and down but pitching better recently.
Sadowski has pitched well since being recalled.

And then Sanchez (with Randy Johnson lurking on the DL.)

They already have a 2 game lead for the Wild Card and with that starting staff they are not going on any prolonged losing streak.

Now... Giants fans... allow yourself to imagine that rotation in a short playoff series.

If pitching wins series, who could beat San Francisco in a best of 5 series that has Tim Lincecum pitching twice?

And then has Matt Cain lined up with the other team's #2 starter and either Sanchez, Zito, Johnson or Sadowski against another team's #3 or #4 starter.

Will you allow yourself to imagine them not just being happy with the post season but actually having the arms to pitch into October?

I know Giants are tormented and underratedly so.

But let yourself imagine a long October in China Basin... and who knows? Maybe last night was the turning point.