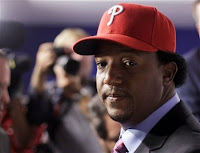 I told you to retire!
Remember back in November when I told you, Schilling, Maddux, Glavine and Smoltz to all hang them up?
That if you did and joined Mike Mussina, then (assuming Schilling doesn't get in on the first ballot) that the Cooperstown celebration in 2014 would be a remarkable collection of aces who thrived when the sluggers were all 'roided up.
Schilling read the writing on the wall (and I assume this blog) and called it quits.
Maddux did the same.
But Glavine didn't and got unceremoniously cut.
Smoltz has found a spot with the Red Sox and the results have been mixed.
And now Pedro is going, not to the Dodgers where they have a cushy lead and play in a pitchers park, but to PHILADELPHIA?
You won't find a bigger fan of Pedro than me, but he was worthless with the Mets last year! And now he is going into one of the roughest places to play, with ZERO good will in the bank and will be pitching in a bandbox!