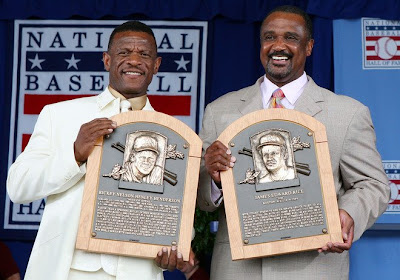 As always it was emotional, fun and touching watching the Hall of Fame ceremony. It's like a televised event from Mount Olympus. And MC George Grande was wonderful in giving each of the 50 Hall of Famers a moment of glory (and recounting the hilarious Gaylord Perry home run the day of the moon landing.)
Rickey Henderson's speech was surprisingly humble and made reference to his infamous "I am the greatest of all time" line. But he still managed to be funny talking about his high school days and trying to get Reggie Jackson's autograph. Plus his tribute to Billy Martin was great.
And of course for me seeing Jim Rice finally get his moment in the sun (or drizzle as it was) transformed me into an 8 year old again... and the realization that he was watching The Young and the Restless when he got the Hall of Fame call should have been carved onto his plaque.
I was going to write a long Hall of Fame post... but I realized I had already said everything I wanted to say.
So I will summarize.

1. NONE OF THE HALL OF FAMERS IN ATTENDANCE WERE ELECTED UNANIMOUSLY
None of the dead ones were either.
When George Grande had Hank Aaron, Willie Mays and Bob Feller all stand up... when he pointed out the class of Frank Robinson, the artistry of Sandy Koufax and the joy of the game brought by Yogi Berra... just remember there was a sports writer who didn't vote for them.
Then they showed the video montage of Rickey Henderson and his many accomplishments. And I thought "What writer in their right mind could not put Rickey on their ballot?
But I said my peace on that already.

2. JIM RICE IS IN... AND FINALLY WE CAN QUIT NITPICKING HIS STATS
I'm sorry getting more hits, hitting more homers and driving in more runs than anyone in the League over a 10 year stretch wasn't good enough for some people.
Yeah he didn't walk a lot... he had Fred Lynn, Pudge Fisk, Dwight Evans and Yaz batting behind him.
YOU put him on base!
The link from Ted to Yaz to Jim are all in Cooperstown... and that ain't bad! And his number is finally going to be retired, which is long overdue.
But I wrote about that already.

3. WHY DID WE HAVE TO WAIT FOR JOE GORDON TO DIE BEFORE LETTING HIM IN?
Joe Gordon's daughter was wonderful in her tribute to her dad... who was an accomplished gymnast, rodeo rider and musician as well as an MVP and a big league manager.
But come on!
Why did he have to be a posthumous election?
But I wrote about that already.

4. THERE IS NO REASON TO STOP PLAYING THE HALL OF FAME GAME
Have the game count!
Have it be an actual game on the schedule with all of the Hall of Famers in attendance!
Are you telling me that wouldn't be a terrific event in the middle of the summer? A possible walk off shot in front of Bob Feller, Hank Aaron and Yogi Berra?
And don't tell me it would be too much of a wear on the players? Especially this year with the stupid WBC and players playing all out in spring training for a meaningless exhibition.
But I wrote about that already.

5. BERT BLYLEVEN HAD BETTER BE AT NEXT YEAR'S CEREMONIES
I'm not talking about being in the gallery, like Dave Stewart, Moose Skowron and Dave Henderson were this year.
Sportswriters have another few months to take a look at his numbers, his longevity and his contributions to two World Series winners and ask themselves "Are we really keeping him out of the Hall of Fame because he didn't get 13 more wins over 22 seasons?
And I will keep posting this picture of him wearing an "I Heart to Fart" t shirt until he gets in.
But I wrote about that already.

Good job as always Cooperstown... one of these years I'll go up for a Hall of Fame ceremony. Probably not next year.