IF THE PLAYOFFS STARTED TODAY… ALL STAR BREAK EDITION

I never think it is too early to line up playoff match ups.

After the Red Sox won their first game I noted that they were tied with the Orioles for the Wild Card. (The Blue Jays were already 2-0.)

But now it is the All Star Break… and the season is more than half over.

IF THE PLAYOFFS STARTED TODAY
The Match ups would be…

Talk about old school match ups! Both teams have the same uniforms from the 1930s!
I honestly don’t know how the Tigers are doing it, but they are doing it! Miguel Cabrera is putting up monster numbers and Brandon Inge has made up for Magglio Ordonez’s startling lack of power.

Verlander gives the Tigers an ace to match with Beckett and Edwin Jackson and Rick Porcello make the rest of the rotation formidable.

The Red Sox starting staff has more depth and their lineup has more swagger. Plus I’d take Papelbon and the Sox pen over Rodney and Detroit’s pen. But the series would be worth it for the marquee opening game match up. 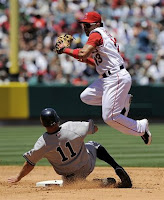 The Angels have the Yankees number and it is hard to understand why. The Angels are riddled with injuries and don’t have the star power of New York… and yet they just smacked around the Yankees pitching staff to close out the first half.

Sometimes this Yankee team looks like a pennant winner. And sometimes they lose a series to the Washington Nationals.

And as a manager, Mike Scoscia might very well be the best in the game. 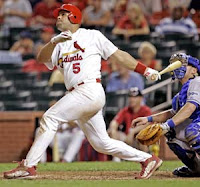 Manny vs. Albert! Joe Torre vs. Tony LaRussa! As fascinating a first round match up that you can find. LA seems to have everything. Solid if not spectacular pitching, a good if not spectacular ‘pen, and a line up that gelled in the wake of Manny’s suspension.

The best team in baseball looks ready to steamroll through to the World Series.

But look out… the Cubs looked that way last year and they got swept away by the Dodgers and their Cooperstown bound manager.

LaRussa might drive me bonkers, but he’s a dangerous manager to bet against. Just ask the other teams haunted by 2006! 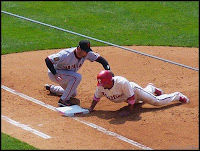 Remember a few weeks ago I showed a not so crazy scenario that had a four way tie for first in the NL East? Well now the World Champs have opened up a 4 game lead and seem poised to put the division away. J. A. Happ’s emergence as a reliable starter helped ease the Phillies’ pitching woes.

But the Phillies staff isn’t exactly recalling memories of the 1971 Orioles. And in this series they would have to face Tim Lincecum… TWICE. Can’t you picture the big Phillies bats swinging in the dirt and being shut down by Lincecum, Cain and company? If arms neutralize bats, then this will be the poster child for “Pitching beats hitting debates.”

And in the Sullivan family would have a lot of interest. My dad is as big a San Francisco Giants fan as you will meet while his brother, my Uncle Donal, is a big Phillies fan. Oh… that match up would be fun!

Did you notice something?

There is a possibility that the ALCS would be Red Sox vs. Yankees and the NLCS would be Dodgers vs. Giants.

Of course I had the Yankees stumbling against the Angels (seeing a Vlad&Torii-less Angels squad sweep the Yankees this weekend makes me skeptical.)

But still, that would be a pretty amazing pair of LCS’s.

Not sure the Sullivan family could withstand a Red Sox vs. Giants World Series.