17 years later... the Marlins break ground on a new park 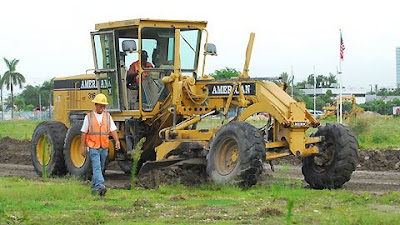 The Marlins were supposed to play a few years in Joe Robbie Stadium before moving into a baseball park when they were formed in 1993.

Then from 2006 to earlier this year they were in Dolphin Stadium.

And now they are in LandShark Stadium.

Of course they haven't MOVED! The park has been renamed over and over again.

But lo and behold either they are truly building a new ballpark or someone at the Marlins PR department hired a dude in a tractor for good press.

Hey a new ballpark could be great news for Marlins fans. They could add to their World Series totals which right now tie the output of the Indians, the Phillies and the Cubs (and they all had a 90 year headstart on World Series play.)

The best news for Marlins fans, of course, is they played the Nationals again.

Man they look like pennant contenders when they play Washington!
Posted by Sully at 2:08 PM