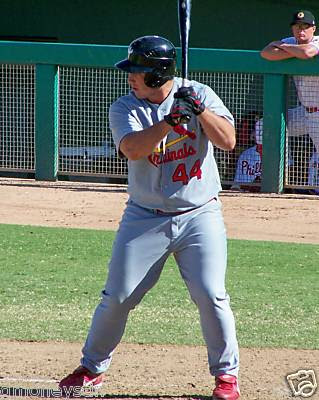 Seriously. I know Brett Wallace is a coveted prospect. And I know that playing in the American League means he can slide into the DH role.
But the guy is 22 years old. He won't be 23 until August 26th.
Should he REALLY have the ole Steve Balboni build?
It's one thing when Matt Stairs physique when you are 16 year veteran over 40 years old and hanging on as a left handed pinch hitter.
This guy Wallace is going to be supposedly one of young corner stones of the offense. The scouting report says he may have to move from third base.
Really? How about he has to move from the all you can eat buffet at Sizzler?
Look this can be a good deal for Oakland if he turns into a solid slugger and doesn't have Albert Pujols blocking his way. And who knows, maybe the other two players (Clayton Mortensen and Shane Peterson) can contribute and this will be a much better haul than letting Holliday skedaddle for the draft picks.
I just think Wallace needs to meet a little fellow named "Dr. Atkins."
Posted by Sully at 12:28 PM