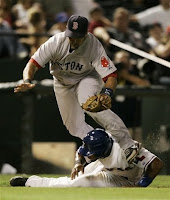 Well it has come to this...
Less than a month ago, the Red Sox had a 5 game lead. Now they trail the Yankees by a game and are one game away from being swept for the first time all season.
Am I in panic mode?
No. I'd rather see the Red Sox peak in October than in July.
But the team needs a bat and they need one now. They can't afford to blow many more complete games like the one Beckett threw tonight.
Oh I'm grinding my teeth tonight.