Baseball is the greatest game of all 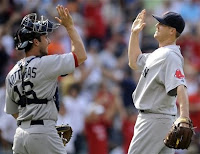 Seriously, I can’t understand an argument for another sport that can be so emotionally draining and rewarding as baseball.

Think about it… the Red Sox had their most brutal loss of the season last night. I couldn’t even write about it.

Eddie Pepitone was merciless on me. I couldn’t even watch the highlight shows.

If it were football, I’d have to wait a week for the next game. The loss would literally ruin my week.

If it were basketball or hockey, my team would play again in a day or two, but it would be against a different opponent.

In baseball there is a chance for INSTANT REDEMPTION.

Less than 17 hours after shaking my head in disgust at the 11-10 bed wetting from last night, I was jumping up and down thrilled at a come from behind 4 in the 9th and 1 in the 11th victory.

I mean the Red Sox were down 5-1 and looked dead from the neck up. I was about to start a blog post saying the only good thing about this game was it was over before 1 PM Pacific Time and I didn’t have to think about them anymore.

Even after Youk’s 2 run shot, I thought the Sox were dead. They had 2 outs, nobody on and George Sherrill looking damn good. I almost stopped watching.

And the play that no box score will EVER show is ball four to Varitek. He checked his swing (or did he) they appealed to first. If the ump said “SWING”, the game was over and the Orioles would have taken 2 of 3.

He said “No swing” and the next hitter, Rocco Baldelli tied it.

It was a game where Julio Lugo was one of the heroes saving Jason Bay’s and Josh Beckett’s butt.

That is a very strange sentence to write.

But baseball remains the greatest because of that.

A day off and then back for for the Mariners