Welcome to CitiField... home of the Mets and shrine to the Dodgers

Seriously Dodgers… the taxpayers of New York paid good money to build this shrine to the Dodgers past. Hope you feel at home.

New Yorkers have such warm and fuzzy feelings for the Dodgers that it is kind of sad. There are many people in Brooklyn who still wear Dodger caps and the Cyclone logo is designed to resemble to old Brooklyn caps.

In 2007 I wrote about how insane the design of CitiField was. It is a shrine to a team that ripped the heart out of Brooklyn and ignores the history of the team that has to actually play there.

I had equated the Mets with a husband who pines for his hot ex girlfriend while ignoring his plain Jane but loyal wife.

I think it might be even more pathetic than that.

I think the Mets are kind of like Philip Seymour Hoffman’s character in Boogie Nights and the Dodgers are Dirk Diggler.

Remember when he bought the Transam because he wanted to impress Dirk Diggler and Dirk doesn’t care at all?

The Dodgers will be looking at the stadium, not really caring, then the Mets would awkwardly butt in and say “Can I kiss you on the mouth?”

Trust me… that analogy makes sense! 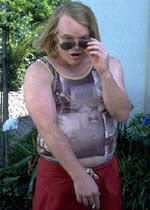