I guess the Rangers aren't dead after all 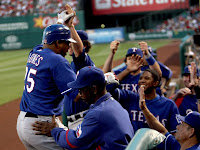 On June 29th, I wrote that the Rangers 2 ½ deficit was the beginning of the end for the Rangers and basically said they were probably going to fall to third.

Well I need to give the Rangers credit where it is due.

They beat the Angels 4 out of 6 times and swept Tampa. 2 ½ behind became a 1 game lead in 9 days. And they can go into Seattle and crush the Mariners dreams starting tomorrow.

Who knew Andruw Jones had a three home run game in him? How ironic he’d do that against a Los Angeles team after he hit three home runs all last year for the Dodgers?