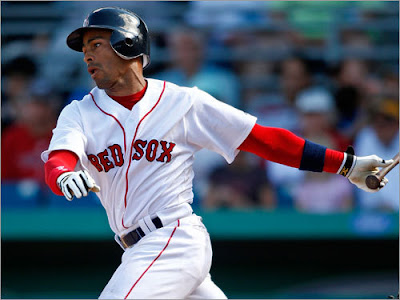 Look, it is easy to dogpile on Julio Lugo.
The facts kind of speak for themselves. He was a lousy defensive infielder, was inconsistent at best at the plate, and cost way too much.
And he was a walking reminder that one of Theo's few mistakes as a G.M. was not bringing back Orlando Cabrera and instead replacing him with the merry go round of Edgar Renteria, Alex Gonzalez, Julio Lugo, Jed Lowrie and Nick Green.
All this for $36 million over 4 years (including next year which I assume the Red Sox are paying for.)
But I am going to do what might seem to be the impossible: I am going to write a PRO Lugo piece from the point of view of a Red Sox fan.
SULLY BASEBALL HONORS JULIO LUGO FOR THESE TEN REASONS...
1. He had a terrific hitting streak in 2007.
His 14 game hitting streak in July included a grand slam against Jose Contreras on July 20th.
2. He helped sink the Yankees on April 27th, 2007.
From the leadoff spot, Lugo went 3-4 with a homer, a double and two stolen bases as the Sox crushed the Yankees 11-4. It's fun to beat the Yankees.
3. He "drove in" the winning 2 runs on the Mother's Day Massacre
Granted, he actually grounded out to end the game, but the Orioles butchered the play and the tying and winning runs scored on May 13, 2007 and Julio was the de facto hero.
4. He went 5-6 on my birthday this year.
Granted, on May 14th 2009 the Red Sox LOST in Anaheim, but Lugo got 5 hits and made a few nice defensive plays in one of those bizarro games where Lugo came up big but Papi choked.
5. He got on base to set up the Manny homer
In Game 2 of the 2007 Division Series, he singled off of Angels pitcher Justin Speier. That set the chain of events that led to Manny standing at first and admiring his blast.
6. He helped break open Game 6
Yeah J. D. Drew was the key hero in Game 6 of the 2007 ALCS with his grand slam. But Lugo drove in a pair himself and didn't let Cleveland off of the mat.
7. He got three hits to start off the World Series
He went 3-4 in Game 1 of the 2007 World Series. I wondered if there was a chance he would win World Series MVP.
8. He made some good plays in the World Series...
Especially the games at Coors Field which were closer than people remember.
9. He was a member of a World Champion Red Sox team.
It wasn't that long ago that that was an unthinkable title.
10. I did this for Javier Lopez.
If I could honor Lopez, I can honor anyone.
Have fun in St. Louis Julio. It's a great baseball town.
It wasn't always pretty, but enjoy the ring.
Posted by Sully at 6:17 PM