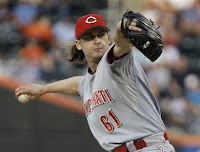 Tonight was a great night for pitching.

And there was a fourth complete game shutout... and I am almost reluctant to bring it up.

I love Bronson Arroyo. He was a great 2004 Red Sox. He pitched well and stuck his hand out for A-Rod to slap it in the playoffs.

And he signed for less to stay with the Red Sox and the Sox repaid that loyalty by sending him to Cincy.

He stinks now. He may get some wins but his ERA would be a good credit score.

And he threw a complete game shutout tonight.
4 hits and no walks.

So why would I be reluctant to bring it up?

It was against the Mets.

Their lineups look like a split squad spring training line up.

The season is more than half over and they could be ten games under .500 before August 1.

How bad is their line up?

Bronson Arroyo throwing a complete game shutout against them is a pretty good barometer.
Posted by Sully at 1:44 AM