ENOUGH WITH THE CHAMPAGNE CELEBRATIONS 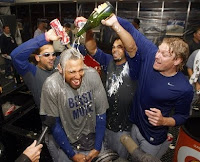 The Dodgers swept the Cardinals away (so much for my post season World Series winner pick) and the celebration on the field today was subdued.

This Dodgers team has larger fish to fry.

But when they went into the locker room, they had a champagne celebration.

And before the game ended Dick Stockton was talking on TBS about how the Dodgers transported cases of champagne from Pittsburgh to San Diego to Los Angeles in anticipation of their division clinching.

So we haven't even started the NLCS and the Dodgers have already had TWO champagne celebrations.

It didn't always happen like that. I remember when the Indians beat the Red Sox to clinch the 1995 Division Series (the first time the opening round was permanently put in place) and there was no wild locker room celebration.

I remember some hands shaking and I have a vague memory of Orel Hershiser walking over to a buffet. They didn't have champagne. Best case scenario had some Kelly's Roast Beef sandwiches on the table.

That is insane. The champagne celebrations should be reserved only for the World Series celebration.

And the staff at Sully Baseball suggest these alternatives for the other celebrations. 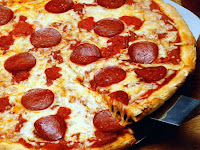 It is quite an accomplishment to make it to the post season... you deserve some pie.

And not some chain store pizza. I am talking a mom and pop pizza place, preferably cooked in a brick oven.

(Wild card teams can't get a topping. Only cheese pizza. You've got to reward the division winners.) 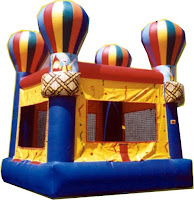 WIN THE FIRST ROUND DIVISION SERIES... EVERYONE IN THE TEAM GETS TO JUMP IN A JUMP HOUSE*

Remember to take your cleats off when you get in... and then BOUNCE AWAY!

Come on, admit it. You'd LOVE to see Manny Ramirez and his hair bouncing up and down in the inflatable castle!

*Was suggested by my adoring wife. 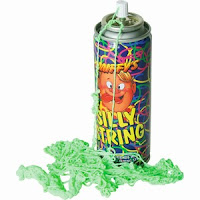 WIN THE PENNANT AND EARN A SPOT IN THE WORLD SERIES...SILLY STRING FIGHT!

Come on! The champagne isn't there for drinking. It's there to make a mess!

And what better way to make a mess than with some silly string?

And how cool would it be to see a celebrating player just hose down Jeanne Zelasko with a can of silly string?

Then when the World Series comes, out comes the bubbly.

The World Series should have more class... like Pedro bringing out a dwarf while wearing goggles.