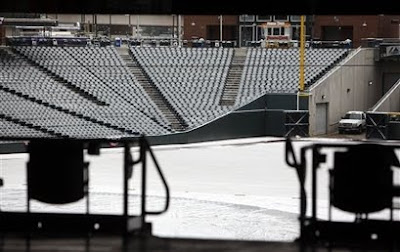 This is a picture that was taken today at Coors Field.

It is covered in snow.

(How much does MLB wish the Braves, Marlins or Giants had passed the Rockies now?)

So game three of the Rockies - Phillies series was postponed until tomorrow because of snow drifts.

So when does the game get rescheduled to?
Late at night!

Around the time the temperature starts freezing Tauntauns by the first marker.

Between scheduling games in cold weather cities to start the season, or the weather report debacle of last year's World Series, someone needs to make sure the MLB's offices have a cable package that includes the Weather Channel!