There are now no longer any valid reasons AGAINST instant replay 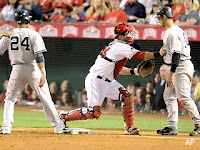 Don't even bother writing a comment because you are wrong. It has moved beyond opinion... it has entered the world of fact.

Tim McClelland was standing right THERE and saw what we all saw with out bare eyes... Mike Napoli tagged Robbie Cano and Jorge Posada and neither were standing on the bag.

So there goes the whole "it will slow down the game" argument. NOT having instant replay slowed down the game.

And the call was wrong.
Now did it cost the Angels the game? No... they were already down 5-0 to Sabathia and they lost 10-1.

But as I argued in my 1987 World Series post about instant replay, a game is the sum total of all the plays. And alter one play here or there could have a great impact on the later parts of the game. And shouldn't there be as few blown calls to mess up that sum total of plays?

In 1987, there were 3 blown calls in Game 7 of the World Series... a game that ended with a close 4-2 final score. Who knows how the game could have unfolded differently if the calls were made correctly.

Yeah two years earlier, Don Denkinger didn't cause the Cardinals to let up the two runs in the 9th of Game 6 and he didn't let up 11 runs in Game 7... but his rancid call and the inability to correct it disrupted the sum of the plays.

Maybe the Royals score two... maybe they don't. But why is it left to human error?

This post season we've seen the Tigers denied a go ahead run in an extra inning winner take all playoff game that they would lose...

A series of blown calls at first base in the Red Sox/Angels series...

The Twins denied an extra inning lead off double in a game they would lose...

The Phillies catching a break when a batted ball hit Chase Utley and should have been called foul was called fair and sparked a game winning 9th inning rally.

And now a call that would get a little league umpire fired.

It's going to happen in the World Series folks... there will be a new Denkinger... or maybe a Todd Tichenor who is eager to put his own stamp on the series.

The solution is so easy. Have another umpire in the booth and if a big call is missed, the video ump can call down to the crew chief and say "Hey... you missed it...and nobody will remember you missed it."

It will be an ump, not Jack Buck, Chip Carey or some other son of an actually talented broadcaster who will be making the call.

And that ump will be in the umpire union! Hey! A new job!

And during the 30 second huddle, the TV station can run a beer ad!

See, it pays for itself. And we get to see fewer blown calls.

Isn't it better to take those 30 seconds (and it never takes that long) to prevent us from EVER knowing the name of an Umpire ever again?