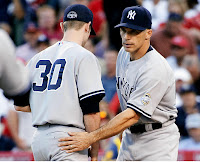 The Yankees lost last night and a lot of the fans are blaming Joe Girardi for lifting David Robertson with 2 outs and nobody on in the 11th.

The Angels rallied off of Aceves and naturally his move, which was indeed curious.

Well the message board and blogs have exploded with venom... and nowhere more than the "enter only if you dare" New York Post Sports Message Boards.


One particular fan who goes by the moniker "nacilbuper" wrote this gem on the board for Mike Vaccaro's article whose title includes the word Crap.


CLUELESS JOE RE-TARDI! He is the worst manager in baseball...i could not care less that they won 102 games...if this was scioscia's team they may have 135 games! Re-tardi never bunts, and his management of the bullpen is atrocious!!! I can give him a pass on the petite move, a petite looked good - but he was at the mound right before the pitch - what did he say?? But going to Aceves over Robertson?? Are u kidding me??? Wasn’t this guy a catcher? Doesn’t he have a feel for the game? If they win it all this year the title of Girardis book should be "In Spite Of Myself: How I won a World Series title being the worst manager in the game”! Scioscia is far beyond Joe – Clueless Joe is at minimum a one game liability in the playoffs vs all remaining managers

Keep in mind the Yankees won 103 games... are 5-1 in the post season and lost a close extra inning game to a tremendous Angels team.

Then again, this IS the Post... the paper that gave us the single greatest headline in the history of American Journalism: 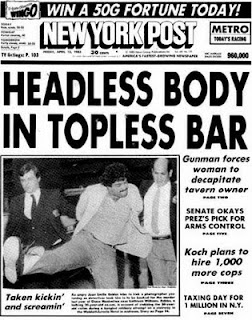