Hey Red Sox fans... let's not get carried away 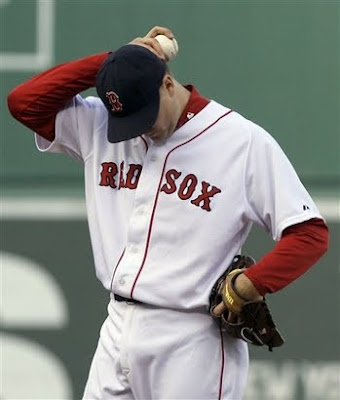 Don't get me wrong... yesterday sucked.

It didn't just suck. It SUUUUUCCCCCCCCCCKKKKKKED!

One strike from winning the game, putting Lester on the hill... and a Game 4 win would send the game back to Anaheim (sorry Angels, that's where you play) with the pressure on THEIR shoulders.

And instead we get a monumental collapse.

But some Sox fans are getting carried away.

Bob Ryan said this was the worst Red Sox post season loss since 1986.

It's not even the worst Red Sox post season loss in the last 12 months!!!

Game 7 of last year's ALCS was MUCH worse!

Come on... the Red Sox had the tying runs on base with nobody out in the 8th... heart of the line up coming up... just a few days removed from the mind boggling Game 5 come back... a trip to the World Series on the line... and they got a goose egg.

I'll think of J. D. Drew striking out against David Price a hell of a lot more than the Angels rallying against Papelbon.

Last year was a chance to make it back to back pennants... have a great shot to repeat as World Champs and maybe have the word dynasty mentioned.

Instead we got a World Series opening in the Trop!

This year? Holding off a Division Series sweep.

Not as much on the line. 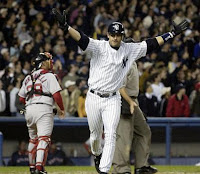 And how quickly we forgot the devastation that was 2003!

The Yankee dragon was about to be slain by a gritty and lovable bunch.

Plus we all knew that the Yankees for what ever reason couldn't hit Embree, Timlin nor Williamson... and if Pedro let up a hit, Grady would have those three guys to record 5 outs.

And then the most agonizing inning since the 10th of Game 6 in 1986 happened.

We replayed that inning, batter by batter until Posada's little bloop tied the game... and a few innings later when Aaron Boone ended it.

We had felt we couldn't be burnt again after that... and then let us feel hope as the outs piled up.

And when the ball rolled through Buckner's legs, not only was the game already tied, but there was a Game 7 on the horizon.

When Boone's homer landed... that was it. End of season. End of hope. Many of us wondered if we should just stop rooting for the team.

It was time to buy a copy of Noose Making For Dummies.

A little less devastating than trying to prevent a Division Series sweep.

So folks, it hurt yesterday. But it doesn't carry the weight of "Will we ever see a World Series title in our life times?"

It doesn't have the "will we EVER beat the Yankees" question hanging over it.

Nor does it have the "I wanted to see a Dynasty!" possibility.

It was quite simply "I hope we don't get swept by a better team in the Division Series" situation.

(We wouldn't want Red Sox fans to be irrational!!!)