The Remote Won't Thwart Me THIS Year!!!! 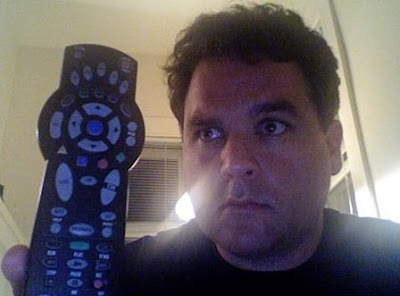 I hate my remote control.

It is unnecessarily complex with more buttons and options than the cockpit of a plane.

And last year the insane construction of the remote caused me to miss the end of a Red Sox/Angels playoff game.

Well last night I had another run in with my remote that seems to have a chip on its shoulder, a la the HAL 9000.

I came home last night and watched an inning or two of the game before putting the boys in their bath. I had the radio on during the bath and was able to listen to Jon Miller instead of Joe Buck which is better anyway.

And my guys were able to wear themselves out splashing away in the bath and I got to hear the Phillies rally in the 8th inning.

It was time to go to put the boys to bed and I rushed over to the TV where my wife was watching Top Chef... a great show and tonight Natalie Portman was inexplicably one of the hosts this week.

I turn the channel to record the end of the ballgame. I see the game has spilled over to the next time slot on channel 11 in Los Angeles and the cable TV guide had "The Simpsons" on at this time spot.

I record the time slot and add the provision of an hour extra in case the game goes into extra innings.

Up we go to bed. I read the boys some Winnie the Pooh and Pamela Camel and then they were sound asleep. 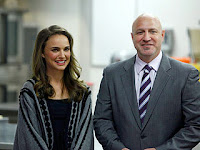 I come back downstairs and listen to Queen Amidala tell some poor shmuck chef that leeks don't have enough protein.

And some cocky New York looking chef gets voted out even though all show he was saying "Hey... I'm not getting voted off! FUGEDDABOUTIT!"

And I wasn't antsy because I knew the 9th inning was being recorded and I was going to see the end of the game.

Then I looked at the cable box.
No red light.

The extra hour I programmed didn't register. Maybe I didn't hit the right button. Why would I have? I mean I just hit "OK" when it asked me to confirm with enough strength to make blood shoot out of my thumb.

Now I was pissed.

Top Chef was over and I flipped on what the DVR had recorded.
It had recorded 15 minutes and it was starting at the top of the 9th with a runner on base.

If the game lasted for 16 minutes more, I would miss the end of it.

Ryan Howard hit an RBI double to make the score 6-0 and I thought "Oh man, this top of the 9th will last 15 minutes!" But then Shane Victorino tried to score and was tagged out by at least 348 feet. Going to the bottom of the 9th...

And OF COURSE the Yankees started to rally.

They put a few men on... they score on an error... I know if Charlie Manuel goes to the pen, the warm up pitches and the commercial break would eat up the rest of the time!

He stays with Lee.

A-Rod strike outs... Lee faces Posada... only a few minutes left until the recording runs out.

Lee strikes out Posada... I get to see the end of the game.

And just as Carlos Ruiz runs up to shake Cliff Lee's hand, the screen goes blue and it asks "WOULD YOU LIKE TO DELETE THE SIMPSONS?"

If the game went on for another 5 seconds I would have missed the ending.

And I've seen enough Yankee games this year to know it is never over until that last out is made! Especially if Brad Lidge was coming out of the pen.

I exhaled and then looked at my remote... and laughed.