Hope for the Twins 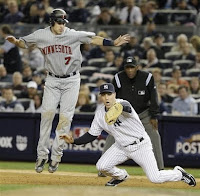 OK admit it Red Sox fans… when the Twins were up 2-0 in Game 1, you were thinking “Holy Cow! What if the Twins win this?”

I did… but alas in the end it was men versus boys.

So the Twins are dead, right?

I mean I had written for weeks that the only way the Yankees could POSSIBLY be eliminated in the Division Series would be if the Tigers won the Division and Justin Verlander won his two starts and either AJ Burnett or Andy Pettite blow their starts.

Well I give Ron Gardenhire credit for his strange pitching strategy for game 1.

Obviously the team was exhausted after the wild end of the season and the amazing one game playoff… and it looked like Gardy basically said “We aren’t winning against Sabathia.”

So did you see what he did? He used his junior varsity pitching staff.

Seriously, did you know who Brian Duensing was? I mean other than members of the Duensing family.

If you answered yes, I might have to go all Joe Wilson on you and say YOU LIE!

Yes he had 4 solid starts down the stretch… but they threw in a guy with 84 career big league innings to start game 1 of the playoffs in Yankee Stadium. And for about 4 innings he held his own…

But when the roof caved in, who did Gardy bring in?

Did Matt Guerrier or Jose Mijares or Jesse Crain or Joe Nathan come in?

So the two teams have a day off today and will resume tomorrow.
And when they do, Nathan will be on 2 days rest… as will Guerrier, Mijares, Crain…

And the Twins will be throwing Nick Blackburn, who save for one bad game against Oakland, has been outstanding since the last day of August.

And the Yankees will be starting AJ Burnett, a classic “Who knows what you are getting?” pitcher. If the Twins win that game, they go back to the Metrodome, where they could split the series and send it back to the Bronx for a do or die finale of which the Twins will have nothing to lose and the Yankees will be tight… and possibly pull off one of the great upsets in baseball history.

Oh who am I kidding, the Twins are getting swept and they know it.