Did Lidge's save give ANYONE confidence? 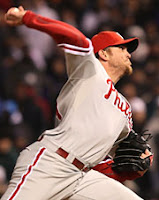 So Charlie Manuel brought in Brad Lidge in a one run playoff game in the 9th inning at Coors Field.

He's a braver man than me.

And a quick glance at his line score makes you say "Hey! Maybe he turned a corner! Maybe the Phillies can rely on Lidge."

Did you SEE that inning?

More than half of his pitches were balls... he put two men on and was behind everyone. Yes he got the save, but are you REALLY going to trust him with a one run lead again.