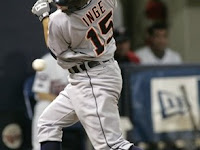 This has not been a glowing post season for big league umps.

Brandon Inge was hit by a pitch in extra innings of the One Game Tigers/Twins playoff that would have put Detroit ahead.

Some strange calls at first went against the Red Sox in a key inning in Anaheim.

Later a play at third was blown in the Red Sox favor.

In Minnesota, Joe Mauer dumped a double in extra innings that was fair by a foot... but called foul.

In the 9th inning of a tied game in Denver, a ball clearly bounced and hit Chase Utley in the batters box and it should have been called a foul ball.

At least in Denver there was an excuse... the umps eyes were covered.

But doesn't that just bring back the specter of instant replay?

Most of these bad calls were exposed in under a minute on TV.

Sometimes the correct call is shown over and over again before the manager is done even arguing on the field.

Wouldn't it be better for baseball to get the calls RIGHT?

Maybe the Twins would have scored twice in the bottom of the 12. But the win wouldn't have the ugly stench of the Tigers being cheated out of a run.

And yeah, had Joe Nathan retired the Yankees in order, there wouldn't even be the need for extra innings in the Bronx. But the Twins had enough going against them... they didn't need the UMPS working against them.

I'm becoming a broken record as I stated my belief in instant replay in general and also using the 1987 Twins/Cardinals World Series as a reason to use it... but if we have the capability to get the calls right WHY THE HELL DON'T WE????