The window for a Freeway Series is closing 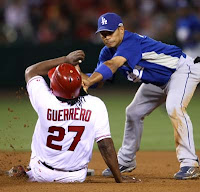 Living in L. A. county, I can tell you there was some excitement here over the possibility of a Freeway Series… Angels and Dodgers. After all both the Angels and Dodgers have cohabitated in Southern California since 1961. They have appeared in the post season together in 2004, 2008 and this year and have never faced off in the World Series.

This was as good a year as ever and frankly it might not get any better next year.

The Angels have their free agent woes and if Chone Figgins and John Lackey skedaddle, the last players from the 2002 World Champions would be gone.

Not to mention Bobby Abreu and Vlad Guererro’s impending defection the team might have a much different look next year. And maybe a team like the Rangers could take advantage of the transition.

But at least the Angels have Arte Moreno running the team and the steady Mike Scioscia entering his second decade as Angels manager.

Up the highway and ACTUALLY IN Los Angeles, the Dodgers wish their only problems were free agent related. Pitchers Vincente Padilla and Jon Garland can go… as can infielders Ronnie Belliard, Orlando Hudson.

Plus you have Manny’s slowing bat and a team that may have peaked.

But man oh man the team is in the middle of a divorce that makes The War of the Roses look civil. If I am not mistaken, Michael Douglas never FIRED Kathleen Turner in that movie!

So who knows how this is going to go down, but chances are it won’t mean lots of money to be spent on free agents. Jason Schmidt’s contract expiring won’t save them THAT much money!!!!

Plus with Joe Torre probably not going to be around forever, you might see the Mannywood era sputter away and give way to a resurgent Rockies team and an improving Giants team.

Call me an alarmist, but I am predicting not a lot of traffic around Chavez Ravine and Anaheim next October.

Oh who am I kidding? OF COURSE THERE WILL BE TRAFFIC! It just won’t be because of playoff baseball.