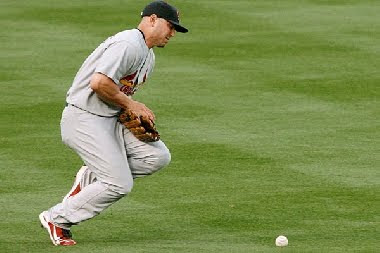 Matt Holliday is obviously a terrific player.
He was an MVP runner up in 2007 and was the catalyst for the brilliant post season run for Colorado.
He hit the game tying triple off of Trevor Hoffman in the mind boggling one game playoff against the Padres and scored the playoff clinching run.
He was the NLCS MVP in 2007 and hit a home run in the World Series that for a moment brought the Rockies to within 1 run in Game 3.
And he had a terrific second half of the season with the Cardinals.
And guess what?
All of that is thrown into the trash can. His legacy is the dropped fly ball.
He already had a bone head moment on his resume when he was picked off of first in a critical point of Game 2 of the 2007 World Series... but that is nothing compared to this.
He dropped a ball that Morris Buttermaker would expect Timmy Lupus to catch.
He dropped a ball that HIT HIS GLOVE!
He dropped a ball that if he caught it, the Cardinals would have a split and have a chance to be in control of the series.
Instead the Cardinals, the team that both Vegas and I picked to go to the World Series when the playoffs began, could be eliminated before Sunday!
Is it harsh to say this will be his legacy?
What is the first highlight you think of when you hear Dennis Eckersley?
Come on... admit it. It's Kirk Gibson's homer. And Eck clinched a World Series the next year and won the Cy Young and the MVP a few years after that and got elected to the Hall of Fame.
But everyone, from EJ and the gang in the studio to Bill Cosby brings up Gibson to Eck.
Mike Torrez clinched a World Series and was the pitcher who everyone mobbed in 1977. Who remembers THAT? Not as many people who remember him serving up Bucky Dent's shot.
Lonnie Smith? The guy was a World Champion with three different organizations, but he was the guy who fell for the Gagne/Knoblauch decoy play and couldn't score in Game 7 of the 1991 World Series.
What about Chuck Knoblauch? The guy was an All Star, hit big World Series homers and helped prevented Lonnie Smith from scoring and bunted Danny Gladden over in the World Series winning rally in 1991.
But he is best remembered for blowing a bubble while complaining to an ump in the 1998 ALCS while two runners scored. And the Yankees WON that series!
Ralph Branca was a 21 game winner, a 3 time All Star and got MVP votes in 1947 and 1948. Who remembers that? Not the people who replay the Bobby Thomson homer.
Hey! When you hear the name Bill Buckner, do you think about his batting title? His All Star appearance? His 22 year career and 2715 hits? I bet not.
Well Matt, you had better hope the Cardinals win this series... other wise you are going to be part of a REALLY BAD montage for the rest of your life.
Posted by Sully at 3:07 PM