This was almost a great series... but not quite 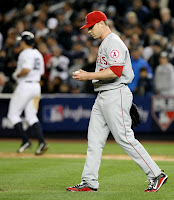 We've had 4 Division Series and 2 League Championship Series finished... and no great series yet.

Oh we've had some great games. In fact each series has included one heart stopping finish... and yet we haven't had that series where you look up and think "Man, this could go either way."

If the Angels forced a seventh game, I would call this a great series. Instead it is just a darn good one

Now we have the Phillies/Yankees... and the possibility of a great World Series (something we haven't had in years.)

Now before anyone writes in saying that I am saying only 7 game series could be called great, let me say three of the greatest World Series I ever saw were 6 game series.

The 1992 World Series where the Blue Jays beat the Braves was a great series... as was the bizarre 1993 Series between the Jays and the Phillies.

And the Yankees 1996 come from behind win against the Braves was one of the most startling turn arounds in October history.

But from the moment that pop fly dropped between Aybar and Figgins in Game 1, the Yankees were in control of this series.

It's up to the Phillies/Yankees.

Let's have a classic. And while we are at it, let's have the Yankees lose.

(Sorry... I can only stand so much Yankee happiness.)