Believe it or not, Joe Borowski could join exclusive company 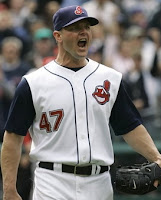 With closers changing teams all the time, it was surprising for me to find out that only 5 pitchers have thrown the clinching pitch in a post season series for more than one franchise.

The 5 names are the kind of elite All Star closers you would expect to see...

Tug McGraw closed out the 1973 NLCS for the Mets and the 1980 World Series for the Phillies.

Randy Myers finished the 1990 NLCS and World Series for the Reds and then the 1996 and 1997 Division Series as a member of the Orioles.

So this year, who can join this elite group?

The way Josh Beckett pitched last night, it was similar to his World Series clinching shut out for the Marlins in 2003... but it is unlikely anyone but Papelbon will be in a series ending situation.

Another Red Sox pitcher, Mike Timlin, closed out the 1992 World Series... but that was a fluke, as would be any big game appearance this year!

Jose Mesa. JOSE MESA? Yeah, he closed out a few series for Cleveland... not the World Series of course... and he might not be the guy you want on the mound for various reasons.

The other two were Hall of Famer Three Finger Brown (1907 World Series) and the strangely named Orval Overall (1908 World Series).

So if the Indians win this series and Borowski is on the mound to clinch it... forget his ERA above 5 and his many blown saves... he will be in select company for closers!
Posted by Sully at 3:53 PM