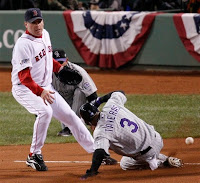 - Well, I hope you are happy, America! You got an exciting game, a funky error that led to a run, great pitching, clutch 2 out hitting and a jaw dropping base running mistake.


And I got a Red Sox win.
So everyone should be happy... except Rockies fans.


- Let's talk about that baserunning mistake.

My co worker Kevin Hench and I wondered openly during the game if it was the worst baserunning mistake in World Series history.

Hench suggested Lonnie Smith in the 1991 World Series.
I said maybe Jeff Suppan in the 2004 Series against the Sox.

But I would argue that Holliday's was worse.

Smith was fooled by a decoy play... and Suppan was brutal but he is a pitcher and not used to be on the basepaths.

But Holiday was inexcusable.
Think of the scenario... 8th inning... the Rockies offense is dead.
But Okajima (who has been MIND BOGGLINGLY good!) is out and Holliday gets his 4th hit of the game.

Helton up, and despite the wretched showing by the Rockies bats over the first two games, they are one swing away from taking a lead in the 8th and possibly STILL leave Boston with a split.

And Helton has the pop to take it into the right field bullpen.

Then Holliday didn't just get picked off. He was picked off by what looked like 10 feet.
The first thing I thought was "Papelbon MUST have balked. I mean no MVP front runner could look THAT STUPID in a critical moment of the World Series."

And then I saw that nope... his amazing 2007 has been reduced to "I can't believe they picked him off!"

How bizarre would it be if he became the World Series MVP after all the boos?
Don't get hurt... you might become a folk hero!