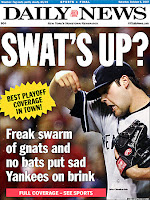 Well the "Bug Game" was cool if for no other reason than it gave New York headline writers a chance to break out all of their bug puns when slamming the Yankees.

YANKEES SEASON ABOUT TO BE ZAPPED

It gave the typical headlines a refreshing new twist.

Of course in the aftermath of the Yankee loss, the attitude in Yankee land was the Yankees lost because of the bugs.

And of course that is jaw droppingly stupid.

If I am not mistaken, the bugs were swarming around the Cleveland players as well.
They weren't wearing (racist) Indians caps.

An interesting way to compliment a guy who walked two, hit a batter and threw 2 wild pitches while slamming a guy who held the most fearsome lineup in baseball to 3 hits in 9 innings.

Finally my friend, the brilliant comedy writer Julius Sharpe, declared the game the single worst advertisement for Off. They emptied can after can on the players... and it didn't work.

Hopefully they won't be around for the ALCS... the bugs that is.