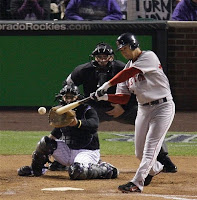 - Well we all wanted Dice-K to come through... but who would have guessed he'd be as damaging with the bat as with his arm?

You could almost feel Coors Field's collective shoulders slump when that single drove in two.
"Oh I get it... we're like those poor AFC teams from 1982 to 1997 that got their asses kicked every year in the Super Bowl."

Keep in mind these Denver fans are familiar with those routs with the Broncos getting killed in the Super Bowl 3 times in 4 years.


- When Okajima came in to relieve Timlin, I was thinking "If Okie gets out of this inning, he's the World Series MVP." JUST as I thought that, Holliday homered to make it a one run game.


- Maybe this is one of the liberations of 2004... or maybe this is the confidence (cockiness?) of knowing you are rooting for the better team... but that was the least stressfull 3 run home run to turn a blow out into a 1 run game I have ever experienced.

The home run left the park and I literally thought "No worries... we've got this."
No wonder the rest of the baseball world hates us.

- Hey Francona... I might be crazy for thinking this... but stick with this line up.
I think Ellsbury and Pedroia 1 and 2 is working. Call it a hunch. Call it going a combined 7 for 10 with 3 runs scored, 4 RBIs and most importantly making sure the tight 1 run game was a "getting out of hand" 4 run lead.

- It was a strange final score... because you are supposed to say "It was a 10-5 game but the game was closer than that."
But was it? It was a 1 run game for about a minute then it was a blow out again.

Again... solid confidence in a post 2004 world.
Pre Dave Roberts' steal and Fox would bust out the clips of the Babe, Enos Slaughter, Bucky Dent, Poor Buckner and Aaron Boone the second the ball cleared the fence.

Tonight?
Eh... we'll get those runs back.

Do you have ANY CLUE how nice it is to watch a sporting event where the supernatural isn't brought up?

Theo's off season moves have come through...
J. D. Drew's slam.
Coco's defense (especially at the end of game 7)
Eric Gagne, save for his game 2 ALCS meltdown, has been the "save the bullpen" guy and it's worked out.
Dice-K winning game 7 of the ALCS and tonight's game.
Even Julio Lugo is hitting .400 in the series.

And Francona's in season moves have come through...
Resting Manny for a month to have him come back and dominate in October.
Not panicking when the Yankees were charging and Gagne struggling and putting Okajima on the shelf for 10 days.
Sticking with J. D. when everyone (including yours truly) called for him to be benched.

And tonight starting Ortiz and Lowell and both coming through.

Karma is good so far.
Let's end this tomorrow!
Posted by Sully at 11:41 PM