Next time you are the home plate umpire and there is a close play at the plate that could determine whether or not a team is going to the playoffs... do every baseball fan in the world a favor:

Give a demonstrative SAFE or OUT!

Don't give a nonchalant little "safe" call about 40 minutes after the play took place.
Don't do it with the casualness and as disinterested as if it were a Devil Rays/Royals game in June. 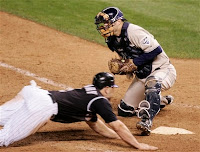 By the way, if the name Tim McClelland sounds familiar, it's because he, like every other umpire in the world, has a Supreme Court Justice/Pope like contract where they never get fired.

He's the same dude who called George Brett out during the "Pine Tar Game."
That was a long time ago... 1983.
I'm not asking McClelland to be as demonstrative as George Brett.

Somewhere in between Brett foaming at the mouth and looking like you just don't care would suffice. 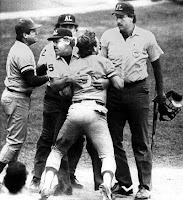