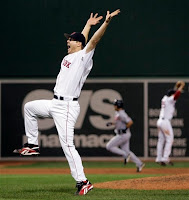 I watch the game tonight at the home of Alec Sulkin, one of the brilliant writers of Family Guy. He declared it the closest 11-2 game in baseball history.

People glancing at it will say "It's a blow out... where is the drama?"
And we all know that our hearts were in our throat when:

1. Somehow Westbrook didn't get rocked. I turned to my friend Goldy at one point and said "Doesn't it seem like we are up by more than 3 runs?" Soon we were only up by 1.

2. Dice K falling apart in the 5th. How did Cleveland only score 2 runs off of him?

3. The Lugo dropped pop up turning into Lofton on second as the tying run with none out.

4. Pedroia and Lugo doing a double double clutch on a potential inning ending double play in the 8th.

5. Garko hitting that deep drive right after the aborted double play... that deep drive towards the triangle and where the bullpen juts out... that looked like a game tying 3 run homer with 2 outs in the 8th.


And yet, somehow they wiggled out of it all.
And I am exhausted.
Thank GOD the 9th inning wasn't close. I needed a brief respite.

Writers far more talented than me will write up the game.

But here are a few thoughts before I hit the hay.

- How often do you see the third base coach become the goat of the series? What exactly was Joel Skinner thinking holding up Kenny Lofton, one of the few Indians who could run, on that deflection to left? Manny wasn't even at the ball and there was a chance to tie the game.

Yeah yeah yeah... the score turned out to be a blow out. But the Red Sox were riding high when that inning ended without the run coming in. Who knows how their shoulder's slump or confidence falls back as the air is sucked out of the stadium with a tie game going into the bottom of the 7th.

You can just see Skinner putting the stop sign up already edited into the "Cleveland Sports Futility" montage.

- The double play to end the 7th inning will never get the credit it deserves for being such a huge moment in a playoff series... but it was. Without that double play, the Indians tie the game. Without it, there is no Papelbon in the 8th. Without it the Indians would take the momentum and maybe Betancourt doesn't cough up so many runs. Without it maybe the Red Sox would keep gripping the bat tightly like they did their last few innings against Westbrook.

- One person who will NOT underrate it's importance is Lugo, whose botching of that flyball would have fitted him with goat horns faster than you can say Tony Graffanino.

When Casey Blake and Jhonny (sic) Peralta botched that fly ball in the exact same spot where Lugo and Manny converged, I'm sure Lugo sighed in relief again.

And you know Casey and Jhonny (?) were thinking "They are going to show this clip for a long long time to illustrate our flop, aren't they?" 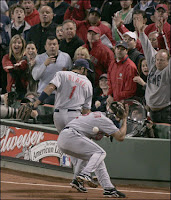 - The series MVP could have been Manny, but Beckett was the right choice. He pitched like an ace and ask Eric Wedge how his two aces fared.

- Beckett joins Reggie Jackson, Steve Garvey, Orel Hershiser, Dave Stewart and his teammate Curt Schilling as the only guys to win a post season MVP for two different teams. Hershiser and Beckett are the only ones to do it in both leagues.

Sadly I didn't have to look that up.

And on that note, I am going to bed.
I hope that when I wake up, the Red Sox will still be A.L. Champions
Posted by Sully at 10:45 PM