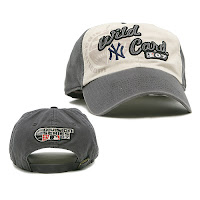 - I can't imagine these Yankees "Wild Card" hats are going to be best sellers in New York this year.

- It is sad that Joe Torre is being treated like he is Grady Little. He should have been awarded a little more dignity than to be forced to answer questions about his job while still in uniform.

That being said, he has managed the Yankees for the same amount of time that Casey Stengel did. And with his contract expiring, this might be the only classy way to end his tenure as opposed to firing him and eating his contract.


- It would be insane, I'm talking Crazy Eddie insane if anyone other than Girardi becomes manager. He already has experienced, has already worked with young kids and will have the respect of Jeter et al because he has won it in a Yankee uniform.

I think the job is already in place for him. Why else would have not only turned down the Baltimore job but also refuse toe ven interview for the Seattle or Cincinnati jobs and instead stay in the YES broadcast booth?

Nobody can like being around Michael Kay that much.

Don Mattingly would be nice for all the 1980s era Yankee fans... but the guy has the same managerial record as Crazy Eddie.


- A-Rod will opt out... spare me any "He wants to win as a Yankee" garbage. He has a chance to rewrite baseball contract history.

Plus he has an agent who is hell bent to rewrite contract history.

Plus both the Cubs and Angels were bounced embarrassingly quickly from the playoffs and need another bat... and both have deep pockets and room in their infield for him and would love to make a splash with their fans.

Plus the Giants and Dodgers need a centerpiece for their offensive attack.

Plus he is probably still in the doghouse with his wife for running around with strippers.

He will go for the money.
And so would you.


- Good for David Justice for calling "bullshit" on A-Rod last night.
When asked about his contract situation A-Rod said "I haven't had two minutes to think about it."

REALLY?
While taking a shower, one of those cross country flights, taking a crap, during a pitching change or lying in bed with a Canadian stripper... the thought of "I wonder if I'm going to get $300 million more dollars" never crossed your mind?

Here's some things that have crossed my mind recently:

- I wonder what it would be like to be President.
- I bet we can build a livable space station on Saturn's moon Titan.
- The history of the country would have been so different if James A. Garfield wasn't shot.
- I wonder how bad Clark Gable's breath was.
- Sir Topham Hatt, the superindendent of Thomas the Tank Engine's railway, actually does a lousy job when you consider all of the crashes they have on the show.
- What would I ask a Genie?
- How did Indiana Jones and Marion get off that island with the Ark after the power of God melted all of those Nazis?
- I wonder if Alex Rodriguez will opt out of his contract.

You can't tell me the chance of putting more than a quarter of a billion bucks in the account didn't flash by his mind.

David Justice said that was crazy on YES. Good for him.
(On a separate note, I am sure the thought "Why did I have to MARRY Halle Berry?" must cross David's mind every night.)

Did you hear his quotes? When I called into Dibble and Kennedy today on the XM, Dibble played the quotes from Rivera.

"I don't know what the Yankees want, if they want me. We'll see. They had their chance."
Ominous quotes for Yankee fans.

No single player meant more to the Yankee run of titles than Mariano Rivera.
Not Jeter, not Bernie, not Clemens... nobody.

His prescience at the end of games, shutting down the opposition and giving the Yankees the chance to say "Just have a few rallies and Rivera will seal the deal" was the difference between 12 straight post season appearances under Torre and missing a few of those years (2000, 2005 and 2007 come to mind.)

Saves can be overrated (the fact that Trevor Hoffman, Lee Smith and John Franco make up 3 of the top 4 all time in saves is a testament to that!) but difference making closers are not.

The sense of doom that Rivera, Fingers, Gossage, Sutter and Eckersley had when they started warming up would make teams press in the 8th inning.

It won't be easy to replace that.

And trust me, after watching years of lousy relievers in Red Sox uniforms, I will tell you games lost in the 9th inning or later hurt most of all.

If a Todd Jones or Eric Gagne is blowing leads in the 9th while Rivera is closing out games for the Cubs... it will be a world of hurt. 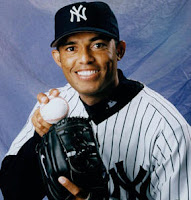 Alright enough about Wild Card teams that can't get out of the first round...