Why would someone bring Jose Mesa into a close playoff game? 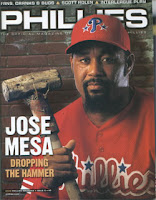 I mean Charlie Manuel knows it's the same guy who blew the 1997 World Series, right?
He knows he's the same psychopath who wants to kill Omar Vizquel, right?

Well before you could say "dumped 7 times since the 1997 World Series" a 6-3 game in the 6th is now a 10-3 whuppin' and the Phillies season is in danger of being on the brink 2 games into the post season.
Posted by Sully at 2:18 PM