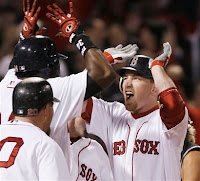 He could be my favorite current Red Sox player. He is a legend whose name will send chills of joy down the spine of Red Sox fans for generation!

What do you say?
I called his signing the worst move I could remember the Red Sox making?

I created a whole elaborate payment system for him implying he was an uncaring heartless and gutless player?
I'm not sure I see the relevance.

I said umpires had a special responsibility to not blow calls involving J. D. Drew because his doing something positive was so unlikely that we can't afford to let one slip away?
And?

That I identify him to my wife as my least favorite player in all of baseball?
Where is this going?

All that is swept away now.
It's what you do in October that people remember!

Do Red Sox fans remember that Dave Henderson was a backup outfielder for the Sox who didn't even arrive in Boston until mid August of 1986 and only started 7 regular season games for the Sox?

How many Red Sox fans in 2004 really knew who Dave Roberts was when the playoffs started? He was a 5th outfielder (Gabe Kapler usually came in for defense before Roberts). Now he is as beloved as Paul Revere.

When you mention to a Yankee fan the name Aaron Boone, do they think of a guy who spent only 2 months with the team and was batting .125 in the ALCS before being benched? Or do they remember a certain home run that will earn him standing ovations at old timers games for generations to come?

If the Red Sox win game 7 and go to the World Series... nobody will remember the lousy season J. D. Drew had. They'll just remember the slam that set the tone for Game 6.

I've been wrong before (see my love for the Gagne trade when it happened) and I will be wrong again.