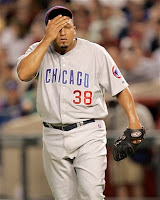 Look, I'm not claiming I know more about baseball than Lou Piniella... but if I had my team on the road for game one of the playoffs... and I had my ace on the mound and he is matching the other team's Ace inning for inning... and he has 8 Ks in 6 innings... I'd let him pitch the 7th.

I'd say "We have a chance to beat this team, get homefield advantage, win the game that they threw their ace and get the edge in a best of five series."

When he came out before the 7th began, I just assumed he was injured.

But Piniella explained in the post game press conference that he is bringing Zambrano back on 3 days rest.

Um... not if the Diamondbacks win game 3 you aren't!

If Rich Hill wins game 3, Zambrano comes back to win game 4 and Mr Throw the Glove after a homer Ted Lilly clinches it, I'll eat a big bowl of crow.

But maybe then Lou might hold Zambrano back as well... got to save him for the World Series!
Posted by Sully at 12:55 AM