Man... that was almost TOO easy 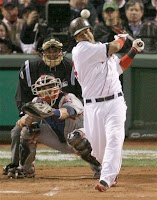 Look, I'm not complaining... but that was such a sound ass whuppin', such a one sided crushing, that by the 6th inning I almost turned the game off to let my sons watch Thomas the Tank Engine.

Of course we all bought into the hype of game 1. The two top Cy Young Award candidates were squaring off. The Cy Young pretenders Wang, Lackey and Escobar all flopped and now the big two were poised for a classic duel between Sabathia and Beckett.

And Hafner homered in the first and every Red Sox fan gulped in unison.
And the only way the night could have gone worse for Cleveland was if the river caught on fire and the Browns moved again.

I talked to a few of my Red Sox fan friends after the game and asked "Was there anything negative about the game?"

They all had the same response... Eric Gagne.
They were unhappy with Eric Gagne.

And yes, Gagne didn't look good letting up two hits and a walk in the 9th inning.
But folks... he was the mop up man. His job was to be a warm body on the mound in a 10-3 game.

And guess what? Along with those 2 hits and that walk, he struck out 3 and didn't let up a run.

So if the only bad thing you have to say about a game was the mop up man's scoreless 9th inning in a 10-3 win wasn't as smooth as you wanted, guess what?

It was a pretty good game.